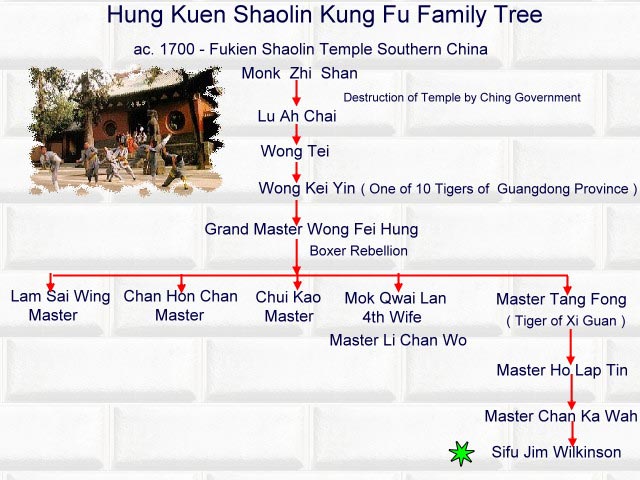 History and origins of Hung Gar, like most of the other Chinese Martial Arts , especially before Wong Fei Hung is somewhat ambiguous . This is largely due to much of the history being passed down verbally from generation to generation, master to student and so on.

There are, however, some historical evidence and facts which sheds light to the origins and development of Hung Gar gungfu through time

Most widely accepted version, regarding the origins of Hung Gar tells us that history of Hung Gar begins during the 17th century in southern China. Hung Gar is said to have its origins in the Southern Shaolin temple in Fukien Province of Southern China.

During a time of turmoil and strife when China was under the rule of Ch’ing dynasty ( Manchurian conquest and rule 1644-1911) a Shaolin monk Gee Seen Sim See was at the Northern Shaolin Temple. When the Ching troops burned down the Northern temple, the monk Gee Seen amongst others managed to escape. Gee Seen Sim See fled to the Fukien province of China where he is said to have eventually became the abbot of Southern Shaolin temple and trained many people in the art of shaolin gung fu, including non-budhist monks who were known as shaolin layman disciples. It is also said that Gee Seen supported the anti-ching movement and took part in the activities to overthrow the Manchu government

According to the legend it was during this time when a young patriot named Hung Hei Goon took refuge at the Southern Shaolin Temple to hide from the Manchu officials. Hung Hei Goon trained under Gee Seen Sim See and eventually became his top disciple. Hung Hei Goon is widely considered as the founder of Hung Gar.

Hung Hei Goon disliked the Ch’ing rule like many other Chinese and spent most of his life fighting to over throw the Ch’ing and restore the Ming. Hung’s real surname was Jyu,however due to being one of the most wanted rebels of his time, he later changed his name to Hung to hide his real identity from the Ch’ing government. He chose the name Hung as a tribute to the first Ming Emperor Hung Mo(Hong Wu) who is widely considered as one of the best, if not the best emperor in the history of China.

The Ch’ing government well aware of what was happening at the Southern Shaolin temple, felt threatened by shaolin temple and its activities. They planed a full scale attack and send imperial troops to destroy the temple and kill all the monks and rebels. The monks were out numbered largely and did not stand a chance against the army, the Shaolin temple was burned down to the ground. Hung Hei Goon and Gee Sim, Luk Ah Choy as well as some others managed to survive the attack and fled to the southern parts of China. These man swore to spread the art of shaolin and fight to “overthrow the Chi’ng, restore the Ming”.

At the time Gung fu training was banned by the Manchus. So Hung Hei Goon taught his art secretly at the Big Buddha Temple in Kwungtung, southern China. Once the ban was lifted, he began teaching openly and set up a school in Fa city of Kwungtung province. He named his art Hung Gar Kuen (Hung family Fist), mainly to hide its shaolin connections from the Manchus.